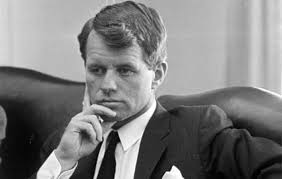 “Progress is the nice word we like to use. But change is its motivator. And change has its enemies.” (Robert F. Kennedy, May 25, 1964, New York Hilton Hotel, Conference of Mayors).

June 6, 2018 marked the 50th anniversary of the assassination of Robert F. Kennedy by the severely disturbed Sirhan Sirhan at the Ambassador Hotel in Los Angeles, California. I was only 12 years old, but already volunteering in the Presidential elections, distributing buttons and campaign pamphlets for the Kennedy offices in New York. I took a class in pubic speaking; I actively embarked on my quest to become one of the youngest Eagle Scouts in New York State, and devoured books about American and World history, politics, and social injustice. I was inspired by one of my teachers, Mr. Irving Sloan, who had been a college professor before dedicating himself to younger students. With his help, I became convinced that activism, vision, and the outright rejection of certain power systems could change the world.

Many of the power systems that exist in our society are readily accepted, with varying degrees of awareness, by a majority of people, further anchoring their place in our traditions and everyday life. Examples of power systems include governmental policies that adversely affect access to health care, social policies that exacerbate poverty, and industrial conventions that delay a global recognition of ecological hazards including climate change.

On a very specific note, and relevant to the practice of our medical specialty, power systems are in place that help maintain a clinical service program where patients are used instead of models in order to train doctors performing procedures. These systems make it difficult for individual teachers to access monies for purchasing models or gain entry to university-based simulation centers. This itself is a formidable obstacle to promoting a system that is learner centric, patient-sparing and simulation-driven.

From my experience teaching teachers around the world I have noted how a country’s medical society or a hospital’s respiratory department refuses to purchase models because “regulations” prevent international wire transfers. Other times, funds for education are said to be unavailable or not budgeted, even though much larger sums of money are readily found to purchase costly equipment that is rarely used because of lack of training. In some places, well-intentioned equipment distributors provide a video tower and bronchoscope for a two-day training course at great expense related to transport, manpower and shipping but hesitate to consider the purchase and subsequent donation of a $2000 airway model to be kept on-site in a teaching hospital or medical society office so that trainees can improve their technical skills through daily practice.

One reason is that human resistance to change is natural. Too many people use power systems to protect personal positions or to reiterate an otherwise unjust and irrational political, economic, social, or institutional policy already in place. Many believe it is their responsibility to protect the status quo. Thankfully, there are others everywhere and, in every profession, who not unlike Robert Kennedy, recognize that change motivates progress, and that progress itself promotes change regardless of its enemies.